Is straight up Got7’s Youngjaeㅋㅋㅋ
He kinda looks like my bias during his peak so I started to look him up and he’s pretty handsome.. I’m shockedㅋㅋ

GOT7’s Youngjae made his first solo appearance on KBS 2TV’s “Immortal Songs” and impressed the audience with his rendition of Kim Yeon Ja’s “Mercury Lamp.”

The February 3 episode celebrated songs from singer Kim Yeon Ja and composer Lee Ho Seop. In his interview before his performance, Youngjae was asked how he felt about being on the show by himself and he replied, “I was worried whether I could fill up a stage by myself when I’m used to seven people being there, but I felt better after the song selection.”

He went on to reveal that the producer of his performance had not been JYP Entertainment’s Park Jin Young, but his own mother as Youngjae added, “It’s a song my mother likes. She told me that she’s sung it a lot when she goes out for karaoke. I listened to her advice as I prepared for this.” He concluded by stating, “I hope [through this performance] that more people of all ages will know about GOT7’s Youngjae as a singer.” 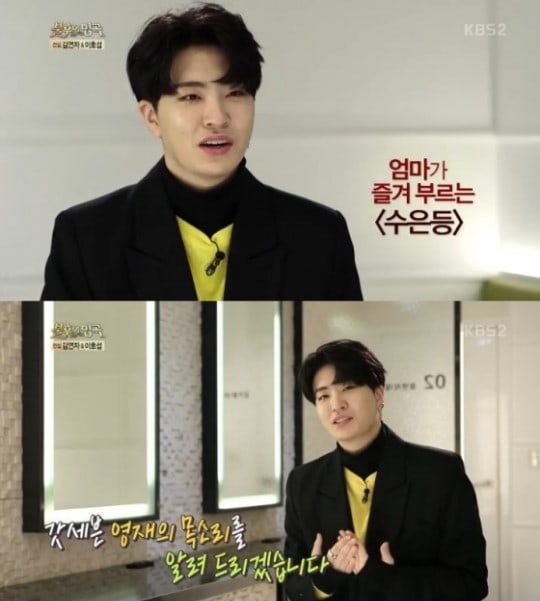 Youngjae captivated everyone with his melodious voice as he performed Kim Yeon Ja’s “Mercury Lamp.” Fellow contestant and musical actress Kim So Hyun said, “Though he’s young, you can really feel the sorrow in his voice. His voice really surprised me.”