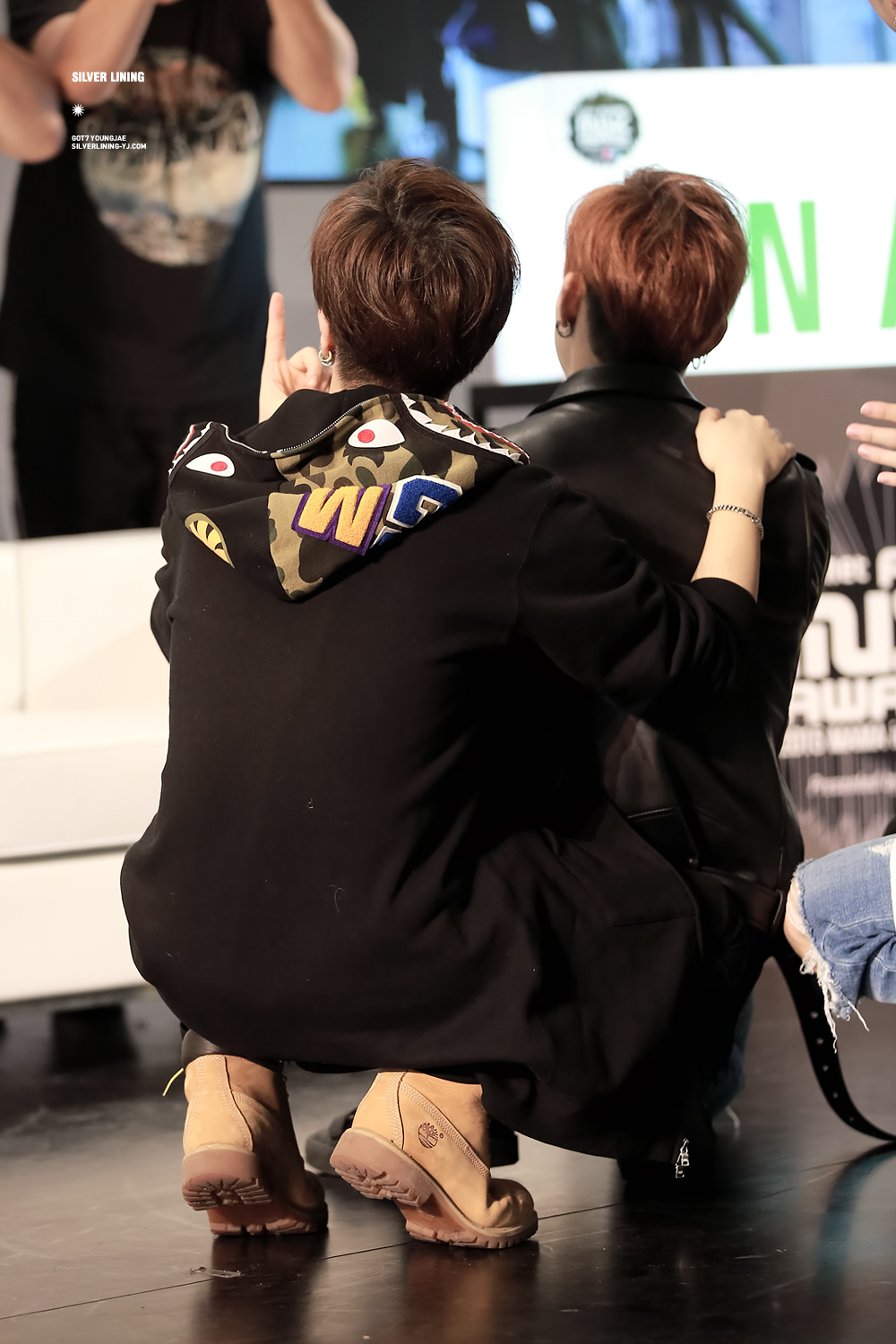 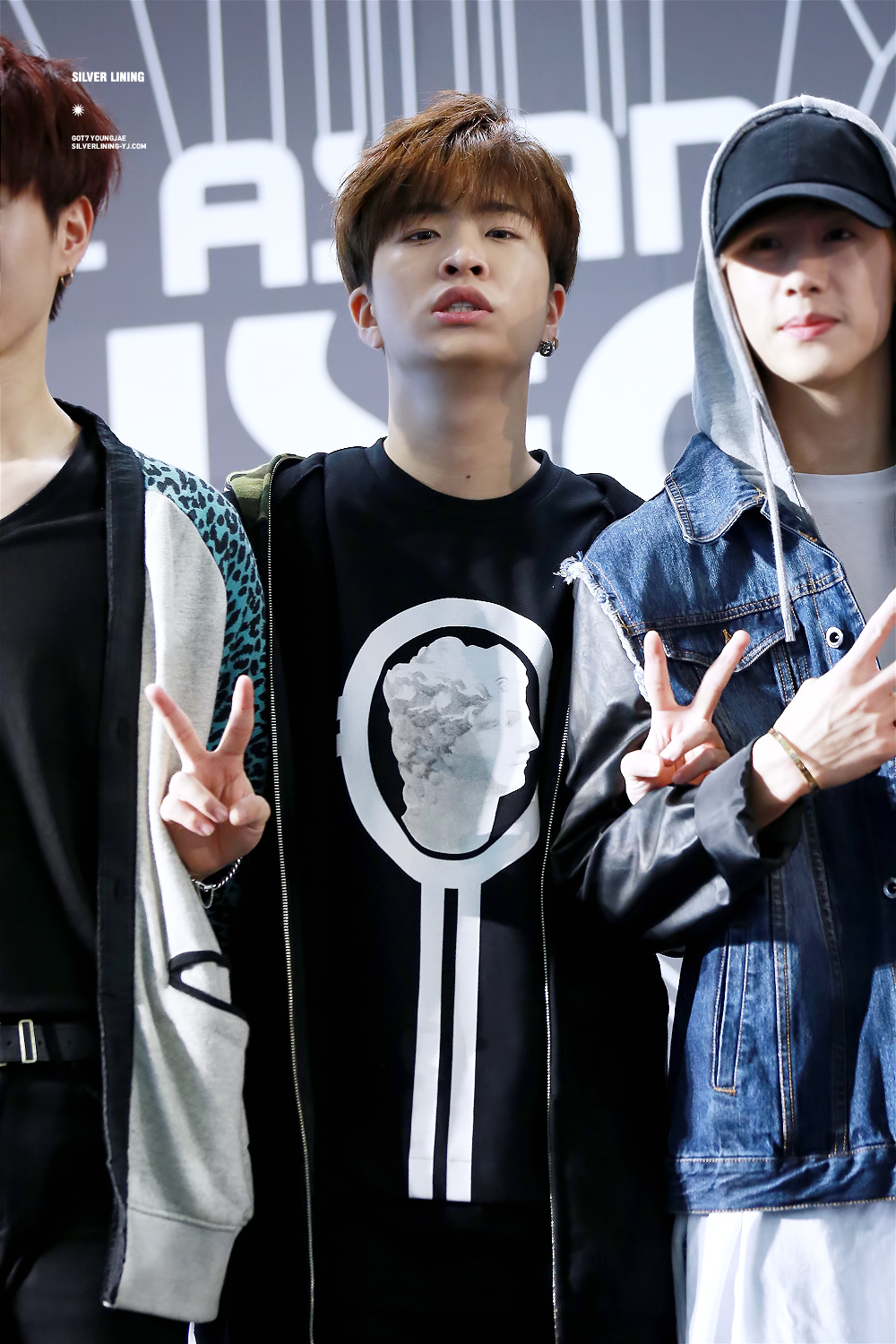 source
Bingu leader Ok Taecyeon should be relieved. Because there’s bingu sprout GOT7’s Youngjae present coming close from behind.
There are a lot of requirements on virtues on idols nowadays. A look that makes one go crazy is for certain, being good at singing, dancing, talking and joking around are also required. They even have to have “씹덕” points too. [T/N: 씹덕 is a slang used within Korean idol fandom world, referring to something of a person that makes you go crazy about him/her. That ‘something’ is personal to each person’s reference.]
Among these people who seem to be perfect, there is someone who catches people’s attention due to his difference, and that someone is Youngjae. Somehow fresh and somehow good-looking, his bipolar charms are tangled together in imbalance..

In 2014, a boy group debuted with ambition. Their name is GOT7. If you’re asking how incredible they are, there is a ‘God’ at the front of their name. [T/N: the 갓 in 갓세븐 is also used in Korean slang as ‘God’] In them, we should place our attention onto ‘God’ Youngjae. To hint you beforehand, the entrance of becoming his fan is very wide but the exit of it can be very small.

# Possessor of Charms that are More Than Plankton
With as many charms as plankton are present in sea, for the people who like Youngjae, the first charming point is his ‘eye smile’. Whether they were closed or open, his eyes stealthily close unintentionally when he laughs, making the people looking at him unarmored their hearts.
Also, Youngjae who says ‘I’m the main vocal!’ to show his existence can put his strong feelings even in their lively dance songs with his incredibly sweet voice. It’s impossible to describe his singing ability in just simple words. Even though he’s not the protagonist in an ardent melodrama, he can be the protagonist of the OST.

They say that the pretty ones are just pretty, but he’s very dedicated that even on holidays, he would practice singing or taking lessons. There would be days when he compose too.
“It’s because I wonder if I should be resting even when there is time for us to rest. That’s why I go to practice due to the discomfort when I am not doing anything.”
The songs that Youngjae is most confident of are Yoo Dohyun’s ‘TWO (사랑 투), Elliot Yamin’s ‘Wait For You’, etc. If ever he got a girlfriend, he wants to sing Sweet Sorrow’s ‘사랑해 (I Love You)’ to her.

# Shy and Good at Cooking, But Still Manly
In ‘Real GOT7’ that JYP Entertainment uploads on their official online video channel, or other variety programs, when one sees Youngjae’s appearance is always the same.  Not interfering unreasonably, he’s half a step behind of members.
“I’m a bit shy. So sometimes I do hear that people say I’m gloomy when I’m at broadcast stations. But I am very bright when I’m with people I am close with. I am not the ‘real man!’ type. Though I am manly in some way, I guess I’m just average? that way, maybe.[T/N: Youngjae is probably saying the sides of him being manly and not being manly are balanced]
There is time when shy Youngjae would ‘become lively immediately’. In ‘Real GOT7’ that was mentioned above, there was once Jackson jokingly said “(Youngjae) is so loud when he greets that it hurts my ear. I think one of my ears can’t hear”. At that time Youngjae answered, “If I don’t do so, our voices might be too quiet”. This unexpected way of being responsible, makes you fall for him 30%.

Youngjae who came from Mapo, Jeollam-do has became the target of teasing occasionally because of his interesting dialect. But there aren’t moments that the spirit when he uses dialect cannot be shown properly. The reversal of him shyly using Seoul dialect like a veteran flusters the people who speak Seoul dialect and the people seeing so.

However, it seems that he inherits from his mother whose ‘Jeollam-do cooking’ he is proud of. He dreamt of being a chef during middle school.

“There is no need to cook in dorm. I just cook simple things like kimchi jjigae, egg roll and omelet rice. Among those, I’m most confident of omelet rice. My mother is really good at cooking, so it seems that it would turn out good if I cook the way she teaches me.”

# Are You Going to Laugh Like That All the Time? Laugh that People Fall For?
There’s something called unique posture in boy groups. For example, folding half of the hand with index finger reaching the end of the nose when laughing, giving a smile like a tsundere.
Youngjae is far from this. He does sometimes laugh with his hand covering the mouth, but it doesn’t help much as his mouth escapes from his hand. In that sense, his laugh is hearty. If you’re wondering how hearty it is, it’s like it makes you fall for it that it deludes you into thinking you can draw his set of teeth with your eyes closed, just like what’s inside his mouth is what’s inside your mouth.

There is a surprising secret. As a matter of fact, the hidden visual member is Youngjae. The nickname ‘Nick.In.Bi (Visual that was acknowledged by Nichkhun)’ was not just a name. Nichkhun mentioned on GOT7’s reality program ‘I GOT7’ that “(Youngjae) looks charming” and named Youngjae as the visual member. If the moment that you think Youngjae is good-looking arrives, it means you’ve already fallen for him 50%.
# There is ‘Freshness’ in him
We have to talk about ‘Twae Youngjae’ before talking about Choi Youngjae. During the times of being a rookie that nothing can be changed if one does something mixed up, because of a mistake made by his tongue in his mouth, Youngjae created the history of ‘Twae Youngjae’.
We can’t skip debut showcase either. The other members entered while showing their manly charm and chicness by riding electric skateboard, while Youngjae appeared without energy when he rode staggeringly. It’s to the point that you’d think it’d be better if he just walked in. From that time on, the ‘freshness’ is one important reason for falling for Youngjae.

Youngjae who gives an impression that he’d be always nervous due to his freshness, would also suddenly become 4-dimensional. For example, this below kind of conversation.
Reporter: “Do you like movies?”
YJ: “Yes. I like horror movies. I watched ‘The Phone’. Recenly I also watched ‘The Advocate: A Missing Body’ and ‘The Priest’. They were interesting.”
R: “We heard that you are quite brave.”
YJ: “Hmm, it’s different from going on amusement rides. You can’t hide when being on amusement rides while you can hide using some tricks when watching horror movies, that’s why I watch it. It makes your heart goes pounding too.”
R: “Then, what’s the movie that you remember the most?”
YJ: “‘Ode to My Father’ of course. It was very touching and inspiring.”
R: “Not a horror movie?”
YJ: “No!”
기자: …
Caught off guard.

# Since when do you dance (so good) like that?
Youngjae started dancing when he got into GOT7. As he had never danced before, in order to make a balance with the other members, he spent the whole day just dancing.
Among those, his talent was found in dougie dance. When he uses his two arms moving left and right, shouting ‘manseh’, he has the swag that even Park Jinyoung would be jealous of. The members would die from laughing when Youngjae shouts ‘manseh’, he wouldn’t mind and continue to focus on moving his body.

Though you might think there’d be nothing more to show his charm, the field Youngjae is in charge of in GOT7 is endless. From being in charge of English, martial art, rap, talking, toe, shorts, backpack, dialect, fedora and even greeting, such ‘small’ parts are left for the latent fans who have fallen 99% for Youngjae through this guidebook to find out.
Original Link